Name and Position of Nominee:

a. As Chairman of the Committee on Labor and Employment, he crafted ordinances to establish skills training centers and personally provided welding skills training to 9,712 unemployed and out-of-school youth at minimal cost to the government due to an innovative approach using the “virtual welder trainor” which he devised. He helped find employment for 8,802 of them, thereby providing economic security and enhancing the lives of thousands of families not only in the city but nationwide as well.

c. Authored legislation that computerized city government transactions with the public, thereby improving the delivery of public service. Also, created www.sangunian.com with its full listings of City Ordinances and Sanggunian Resolutions starting from 1959 up to the present, a first in the .

d. Authored legislation creating the City Telecoms Board and regulating the setting up of telecom cell sites in the city, thereby promoting public welfare and increasing city revenues.

e. Authored legislation and exerted extra efforts to improve the quality of education and raise the status of , thereby easing the financial burden of poor students and their families.

f. Consistently authored and sponsored the most number of quality legislations (259 Resolutions and 35 Ordinances) resulting in the improvement of the quality of life of his constituents, and the progress of his community and country in general.

g. Heads Guam Task Force which expects employ thousands of Olongapo’s skilled workers as a result of the impending transfer of US military facility from Okinawa, Japan to Guam; heads Boy Scout of the Philippines, Olongapo Chapter, which consistently emerges as champions during jamboree-on-the-air (JOTA) and jamboree-on-the-internet (JOTI) international competitions; Creator/webmaster/editor of Olongapo-Subic Bay On-line News and Jobs.SubicBay.Ph; reports to his constituents on the latest events in Olongapo and discussions in the sanggunian session hall during his regular weekly radio program over DWGO, 1008khz AM Band

In summary, his greatest accomplishment is his effective use of his legislative sagacity and skills in crafting timely and significant laws that respond to the needs of the community; and his willingness to work even beyond the confines of the legislative halls to make sure that these laws make their intended positive impact on the lives of the people. 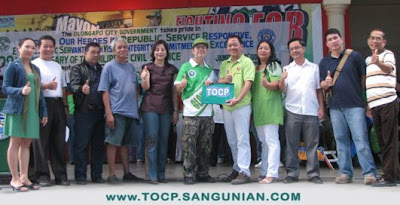