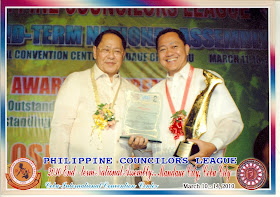 One of the Philippine’s Bests: Councilor Edwin Piano shows his trophy and plaque as The Most Outstanding Councilor in the region and in the Philippines. His national feat was conferred by the Junior Chamber International Philippines and Senator Edgardo Angara at the Philippine Councilors League End Term Conference in Cebu City last March 12, 2010.
OlongapoCity Zambales at 7:37 AM